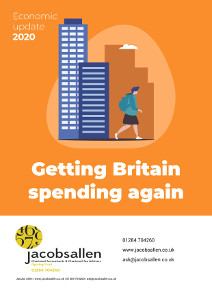 It’s safe to say Chancellor Rishi Sunak did not expect to be delivering the first official fiscal statement less than four months after his maiden Budget speech back in March, but here we are.

The economic impact of COVID-19 has resulted in the UK’s debt-to-GDP ratio breaking the 100% mark for the first time since 1963, while the economy shrank by a monthly record of 20.4% in April.

While Sunak’s latest announcement was more of a fiscal plan than an emergency summer budget as some were predicting, and ran for only around 30 minutes, there was more to it in terms of tax than we have seen in many recent spring and autumn statements.

The headline measures announced continue the theme of recent months and are focused on a “plan for jobs” – a phrase the Chancellor repeated no less than 11 times.

That includes grants for employers who continue to employ staff brought back from furlough, for those who create new jobs for young jobseekers aged 16-24 and for those who take on apprentices.

There were also measures designed to stimulate the housing market. First, a green homes grant will provide a minimum of £2 for every £1 property owners, including landlords, spend on making residential properties more energy efficient, up to £5,000 per household. Lower income households will be able to claim up to £10,000 under the same scheme, fully funded. Secondly, a stamp duty land tax holiday, raising the tax-free threshold to £500,000.

On VAT, a targeted cut was announced for food, non-alcoholic drinks, accommodation and attractions, temporarily reducing the rate to 5%. Not quite the across-the-board cut some had hoped for, but welcomed by the especially hard-hit hospitality and tourism sectors.

Finally, with much flourish, Sunak announced that the Government will underwrite dining-out discounts in August, with up to 50% off bills from Monday to Wednesday, up to £10 per head. This measure is perhaps less exciting than the Chancellor seemed to think and certainly fell short of the £500 high street vouchers for which some had been lobbying. But every little helps.

There were no economic forecasts from the Office for Budget Responsibility or major long-term tax decisions. Those are on hold until what looks like a huge Autumn Budget and subsequent spending review later in the year.

In this special bulletin, we offer informed analysis of Sunak’s speech to suggest how the next six months might pan out.

The move aims to help buyers who have taken a financial hit due to the COVID-19 pandemic, while also seeking to stop house prices from falling further in the months ahead.

Average house prices fell for four months in a row between January and April 2020, while the Chancellor said property transactions were down 50% in May.

With immediate effect, the lower threshold at which the tax is paid has been temporarily raised from £125,000 to £500,000 until next spring.

That means most property purchases in England and Northern Ireland below £500,000 will not need to pay stamp duty land tax as long as the deal is completed before 31 March 2021.

The Treasury said almost nine out of ten people buying a main home will pay no stamp duty land tax at all until next April, and the measure will cost around £3.8bn.

The average stamp duty bill will fall by £4,500, and nearly nine out of ten people buying a main home this year will pay no stamp duty at all.

The stamp duty land tax changes only apply on the transfer of residential properties in England and Northern Ireland. Tax is only payable on the part of the property price within each band (see table below).

Someone who wishes to buy a second home would not pay stamp duty land tax up to £500,000, but would still be liable to pay the 3% surcharge on the whole purchase price.

For residential purchases by ‘non-natural persons’ over £500,000 a rate of 15% applies, subject to certain exclusions.

The Chancellor also revealed a temporary cut to the standard rate of VAT for food, accommodation and attractions, from 20% down to 5%.

Having already deferred VAT payments for businesses up to 30 June 2020 in a bid to help those struggling through the immediate effects of the coronavirus pandemic, the big question was whether Sunak was willing to go one step further and cut UK VAT rates in a bid to boost the economy.

For some businesses, the answer was yes.

From 15 July 2020 to 12 January 2021, the 20% standard rate of VAT will be cut to 5% on supplies of food and non-alcoholic drinks from pubs, restaurants, cafes, and similar premises, as well as supplies of accommodation and admission to attractions across the UK.

This move aims to stimulate consumer demand and protect more than 2.4 million jobs in the hospitality sector, which began to fully reopen for business on 4 July 2020.

To work out the VAT on a gross payment, the VAT fraction will be 1/21.

For the man on the street, VAT is an absolute cost that cannot be recovered. Providing businesses pass the VAT cut on to consumers, goods and services in the hospitality and tourism sectors will cost less.

The remaining question is whether these measures are enough to get people spending in large enough numbers, when so many are still facing uncertainties in relation to their own jobs and financial security.

This seemingly simple tax measure will lead to more complexity for many of the businesses it affects.

Small businesses using the VAT flat-rate scheme may now need professional advice to work out whether the scheme is still worthwhile.

At this point, no indication has been given as to whether the flat-rate percentage rates will be reduced accordingly as well.

The reduction is also likely to cause problems for bookkeepers, as applying the new rate is not as straightforward as it would seem.

For example, the original rate may have been applied if payment was made in advance of 15 July, and credit notes against old invoices will still need to apply the original 20% VAT rate.

All this means additional care needs to be taken. In particular, businesses that use the cash accounting scheme may need to manage the timing differences of VAT, at both 20% and 5% for many months.

For example, if receipts are not allocated against unpaid invoices as they are entered, you may need to be mindful that the software is accounting for the receipts at the correct rate.

Cash registers and electronic tills may also need to be reprogrammed before next Wednesday – another task for businesses already struggling to keep pace with changes necessary to operate safely.

HMRC is expected to issue further guidance over the next few days, which will hopefully provide more clarity.

Grants and Support for Employers

The Chancellor’s speech, billed as a ‘plan for jobs’, included several measures designed to give employers incentives to retain some of the 9.4 million furloughed staff and create new roles.

These came in the context of an underlining of the Government’s determination to wind up the furlough scheme at the end of October and in the wake of a rash of high-profile redundancies from businesses anticipating its tapering off from August 2020.

For some employers, this may be enough to prompt a change of course over planned staffing reductions and might even trigger the moving forward of expansion plans. For others, however, it will amount to a drop in the ocean.

A new job retention bonus comprises a one-off payment of £1,000 to any UK employer who brings a furloughed employee back to work and keeps them in continuous employment until the end of January 2021.

Those employees must earn, on average, above the lower earnings limit of £520 per month, with grant payments being made from February 2021.

The fund will subsidise six-month work placements aimed at people on Universal Credit aged between 16 and 24 and at risk of long-term unemployment.

The Government will cover 100% of the national minimum wage for up to 25 hours per week, plus associated employer National Insurance contributions and automatic employer enrolment pensions contributions.

This will run from 1 August 2020 to 31 January 2021 and comes on top of existing apprenticeship grants.

The kickstart scheme will help firms create and support thousands of opportunities for young people, maintaining their access to the job market and driving the UK’s economic recovery.

The Chancellor has responded to our calls to prioritise work experience and job opportunities for those entering the world of work at a particularly challenging time.

Claire Walker, co-executive director at the British Chambers of Commerce.